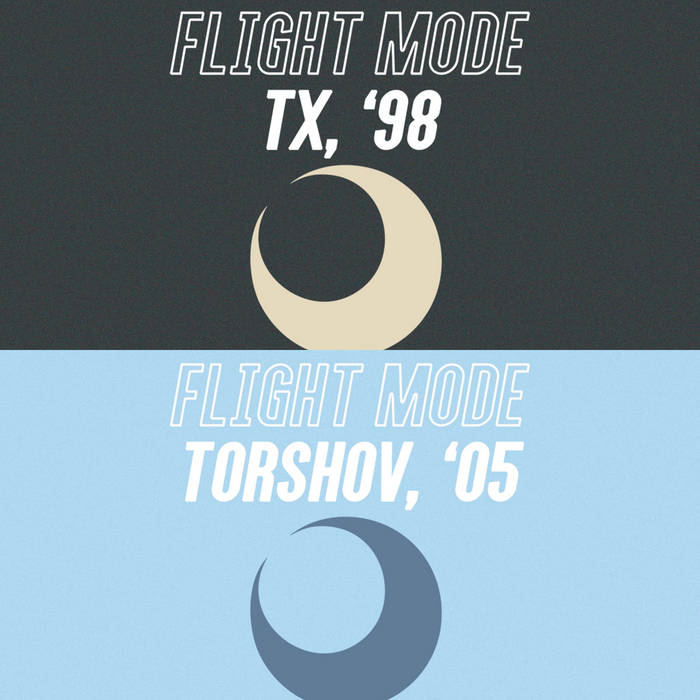 UK/EU friends! Save postage on the Flight Mode EPs - we've got a small handful of both available.
In the USA? Buy it direct from soundaslanguage.bandcamp.com

"The debut EP from this reverential emo band is full of nostalgia, wonder, and autobiographical detail, like a Linklater film soundtracked by Deep Elm Records."
Pitchfork [7.2] pitchfork.com/reviews/albums/flight-mode-tx-98/

Nostalgia is at once the most destructive, most overused and most poetic emotion I know. This EP is my attempt at tapping into nostalgia in its utmost purity, musically and lyrically. That specific year, that specific place, that specific guitar tuning, those specific bands.

So, it's about a certain year in my life. It was 1998, I was sixteen and had just moved to Texas on my own. It's about the people I met, the people I had left behind, and the music I encountered there: The Get Up Kids, Braid, Deep Elm Records bands, and most of all the tape of Ultramagg's self titled debut. An album I haven't heard since, but that was always played in my friend's Taurus as we drove around for hours on end, to Magnolia to see a house show, or downtown to buy t-shirts & records. Or as we sat on our skateboards in all those humid nights spent in an IHOP parking lot. At least that's how I remember it.

And that, of course, is the problem with the nostalgic scope. The lens is inaccurate, always a little blurred around the edges, always filtered through the experiences of the 20 years that came after it. If I remember anything, it's not to trust my memory.

Recorded over a weekend in the summer of 2017 (June 22nd-25th, to be specific), unrehearsed and mostly live, and mixed the week after, maybe as a one-off, who knows. I guess I had to wait until the recording itself was a bit tinged with nostalgia, before releasing it.

Five years later. I still have my quarrels with nostalgia. But I'm en route to somewhere, and I'm moving backwards as I'm moving forward. Torshov is a borough in Oslo, Norway where I shared an apartment with some friends throughout most of my twenties. In 2005 I turned 24.

It's the year full of realizations, but no epiphanies. The year when the wide-eyed arrogance of your early twenties is beginning to fade. When you cross the excuse for a river in this peripheral city every Tuesday, to go stand behind the counter at a chain record store. When you've just released your first EP with your indie rock band, meticulously scissoring each and every jewel case inlay. When you thought it was a good idea to go down to said river with your Jazzmaster for a band photo. When that photo, along with the CDs that will no longer play, is the only real document you were able to find from that year, and everything else is a haze of auditoriums, alcohol and neverlasting love. Because it's a year of limbo, a leap year in every sense but the literal, everything digitized but not yet stored in the virtual cloud. So all your memories are now virtually floating somewhere in the literal clouds with no strings tying them down.

And you're trying to reconstruct, just to realize you weren't really there, that you were someone else, and that someone else is forever lost in the fragility of the time that passed. Then, you think if you can just catch it fast enough, with enough immediacy, it might just ring true, you might be there. But again, you see it's all pure construction rather than reconstruction. But at least this is how I remember it.

I also remember, if I somewhat embarrassedly admit it, that Death Cab for Cutie was probably my favorite band back in '05 – although the burgeoning indie elitist in me was skeptical of (but secretly loving) Transatlanticism and outright dismissive of the newly released Plans. However, when Death Cab expat Chris Walla stumbled into my sphere right on the tail end of recording this EP, I knew he had to be involved in some capacity. He has mixed two of the songs in Hall of Justice. It just seems too fitting. Just like the fact that 24 is exactly 2.42 long (or should I say short). Otherwise, the EP was recorded, and mostly written, over four days in June, just like the last one. June 24th - 27th to be specific.