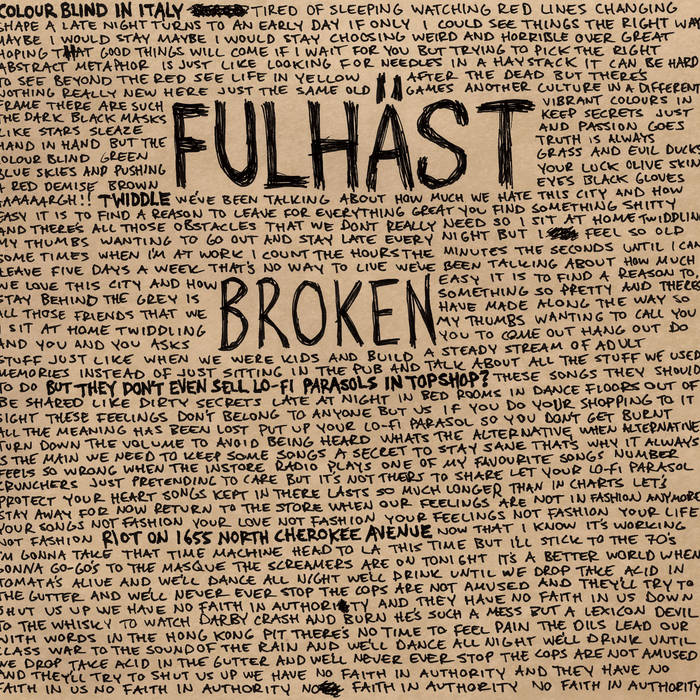 The same old story: Boy meets girl and they fall in love. Six years pass. Girl leaves boy. Boy takes his Game Boy and guitar and makes a record. This is it.
Fulhäst is Nik. He is feeling fine these days, thanks for asking.
Fulhäst plays lo-fi Gameboy pop-punk about movies, heartbreak and stuff. All the songs on Broken are presented in the order they were written (and recorded). The songs on side A were written between July and November 2012 and the songs on side B in December 2012 and early January 2013. Six months of watching a long-term relationship go from alright, turn sour and eventually die.
The album was recorded and mixed by Darren Hayman in Walthamstow over a nine hour period in January 2013

Nik uses an old Game Boy DMG-01 (for you non-geeks, that's the old big one, originally released in 1989) and a software called LSDJ (Little Sound DJ) to make his music.
Up until recently Nik mainly wrote songs about weird movies. Then bad things happened and he needed to find an outlet for all the shit going on in his head. If you're into extremely obscure and virtually unheard-of indiepop bands, you might remember him as one half of Moustache Of Insanity, whose 'Album Of Death' was release on blood-red vinyl by Fika Recordings in the summer of 2011. The first Fulhäst effort, the EP Down The Deuce, was released in the summer of 2012. The extremely limited (100 copies) cassettes in handmade Gameboy-shaped cases sold out within weeks.