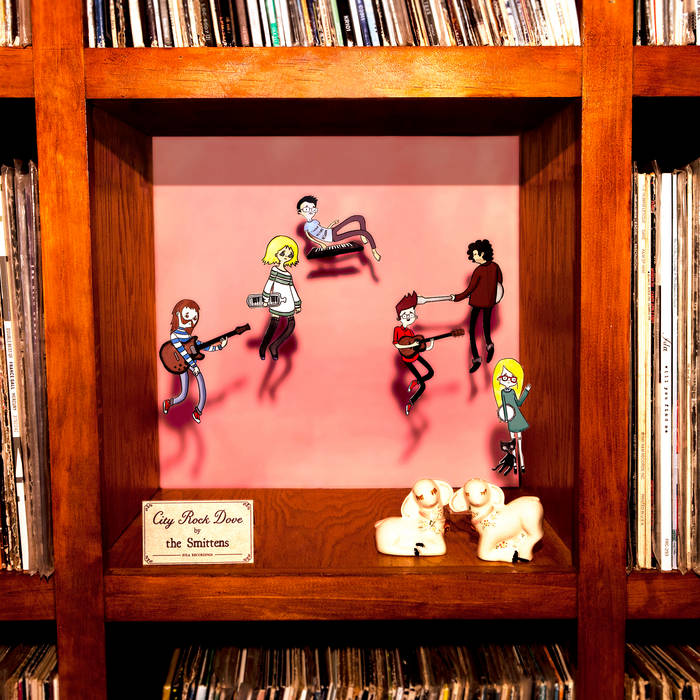 The Smittens are a 6-piece indiepop band that make upbeat and introspective tunes, tinged with vulnerability and optimism. While sonically the elements of multi-layered harmonies, countermelodies and ba-ba-ba singalong hooks still play a large part in The Smittens’ approach to songwriting, as each of the 4 main songwriters has grown, the overall perspective of the songs seems a bit moodier, and more serious. They’ve long since left behind the label of being a ‘cute’ or ‘twee’ band since their debut album 15 years ago.

City Rock Dove is instead an album of transition, ennui and nihilism; honing in on personal politics and gender queerness. The album contends with the turbulent changes of modern America serving only to cement the status quo - and it’s not just the outside world that’s changing either: The Smittens are also singing about the changes in themselves and taking a hard look inside. Gary Olson (Ladybug Transistor) returned to mix the new album, having been instrumental in helping develop the richer textures first seen on 2016’s Love Record Breaker EP.

The album opens with the coming-out anthem Three States, Dana’s very personal tale of change. His vocals for the song were recorded over 2 years during the course of his gender transition. It’s a window into vulnerability, fear, determination and growth: there’s beauty in complexity. Gender and sexuality are behind Cats for Cats, taking a gay dating app cliche (“masc. for masc.”) as the opening refrain, and contemplating being 40, in a long term relationship and how freedom of experimentation always comes with its own costs.

Infinity Pools is a homage to Spanish tontipop, and also inspired by Max’s longstanding love of tropicália. It’s a heady mix of pretentious experimentation and the most basic, simple, silly, absurdly infectious pop.

Missy takes the lead on album closer Prince of Sweden, a love letter to Scandinavia. “I love Cole Porter’s song “You’re the Top” because it’s a rolling list of things that are the best-of-the-best and being the Prince of Sweden seemed like it could be one of those… at least as good as being compared to cellophane. No political innuendo intended.”

Recorded and produced by The Smittens.
Mixed by Gary Olson.