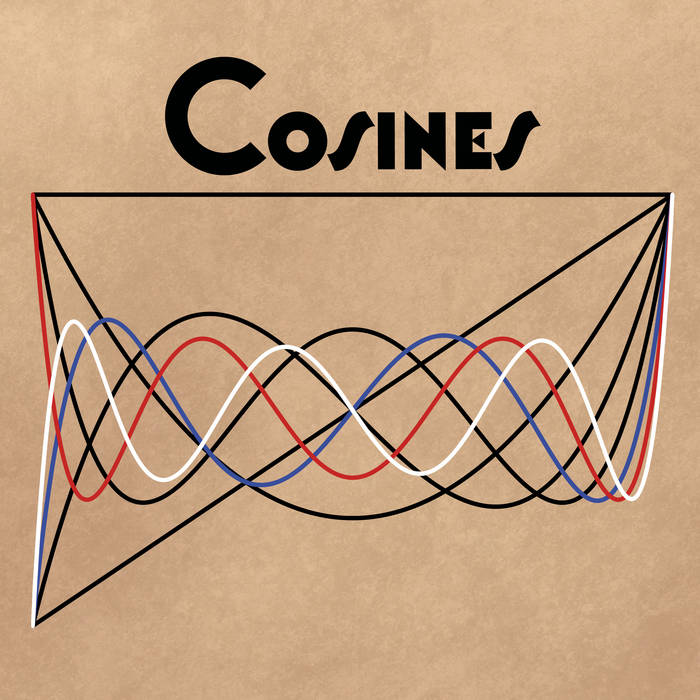 steveinsocal "...You can immediately tell how good an album is by how long it takes for a tune to get stuck in your head and which you then find yourself whistling the refrain...

With this album Cosines ably demonstrate that when it comes to the art of contemporary British indie-pop they are up there with Fear of Men and Veronica Falls. The public at large just haven't realised it yet..."

Cosines are a mathematical pop band from north London. Simon Nelson and Alice Hubley met on the London Underground after a Stereo Totale gig in 2009; two days later Simon was at Alice's house unblocking her kitchen drain. Since then Simon has been round and put up two curtain rails, a blind and a shelf.

This unlikely meeting got them talking and once the DIY was done they started making music together, fusing metronomic pop sensibilities, 60's grooves and Krautrock noise. Their line-up was by completed Daniel Chapman and The Late Jonny Drums, from Alice's previous band The Loves, and Kajsa Tretow from A Smile And A Ribbon.

Cosines played their first show in April 2012 and since then have performed with Comet Gain, Seapony, The Pooh Sticks and Flowers, and also at the Indietracks Festival.

‘Oscillations’ charts the ups and downs, the instability of relationships, misguided hook-ups and ‘subsequent break-ups.

The matter-of-fact blunt Yorkshire stylings of songwriter Alice Hubley’s lyrics tell it like it is, and the resulting tone is one of relief more than sadness. Simon Nelson’s songwriting contributions to the album - Lookout Mountain Drive and Stalemate - compliment Hubley’s songs perfectly and bring a second perspective to the scene.   Peppered with luscious synth tones this is music for modern happy robots.

The album was recorded and produced by the band in Wood Green at Simon’s own Klank Studio, using a variety of instruments and electronic trickery including marimba, autoharp, theremin and cranky old Moog and Roland synths. The album features guest turns from spiritual members Gabe Saucedo (Still Flyin’, Red Pony Clock) and Gary Olson (The Ladybug Transistor), who phoned in their recordings from across the pond.

As a band Cosines are constantly trying to find the perfect meeting point between clean synths and fuzz guitars. Though their lineage and history presents them as indie pop, they bring new wave, avant-garde 60’s pop and synthentic Krautpop to the mix, creating a sound all their own. A brilliant mélange of the likes of Love, United States of America and Stereolab.

The album begins with live favourite Out of the Fire. Its repetitive synth riffs, pulsating rhythm and crunchy guitars reveal a song which perfectly encapsulates the band and sets the tone for the album.

Nothing More Than a Feeling is pop disco anthem from a feisty girl’s perspective, about fraternisations which are never meant to go anywhere.

Pop-in-court plays out like a 70’s TV theme, with call and response synth lines weaving around a metronomic drum beat and Gabe’s marimbas.

Stalemate is a fuzzed up duet about the end of a relationship in middle management executive speak.

‘Oscillations’ closes with Our Ghosts, the epic torch song of the album, showing an entirely different side to the band. New Order-esque synth strings float over thick fuzz and Spector drums.

The album sleeve features the Legendre Polynomials, a sequence of solutions to an equation created by 17th century French mathematician Adrien-Marie Legendre.  He is one of 72 names inscribed on the Eiffel Tower and has a moon crater named after him.

“This is what I want a modern pop song to sound like.” - Louder Than War