by Stanley Brinks and the Old Time Kaniks 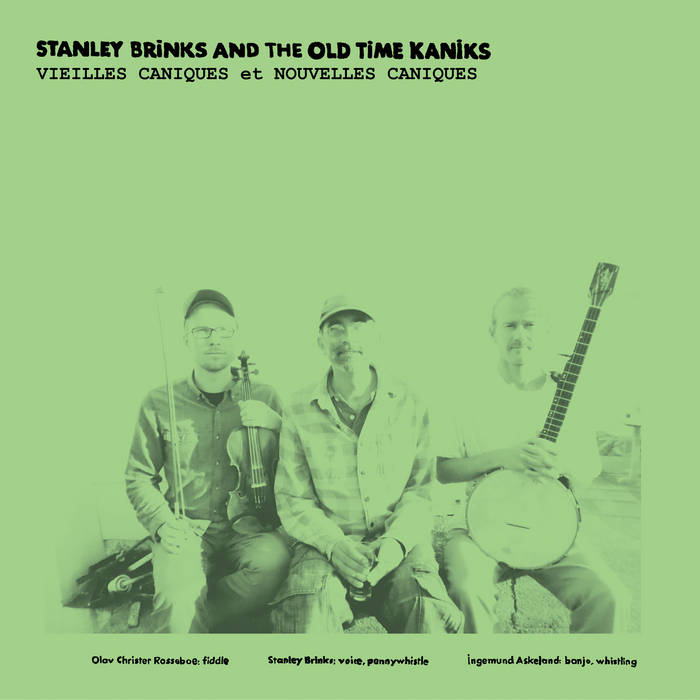 Stanley Brinks - aka André Herman Düne - returns with the new double album ‘Vieilles Caniques / Nouvelles Caniques’, the follow up to 2016’s Record Store Day Release ‘Turtle Dove’. Once again he is joined by the Norwegian folk collective The Kaniks, this time stripped back to a two piece of fiddle and banjo, ‘The Old Time Kaniks’.

This double album of modern day folk tales of love, loss and mischief was recorded during the same time period as ‘Turtle Dove’, on a remote island outside the small town of Egersund in south west Norway. Over the course of a week of midnight sun, midnight swims and midnight beers on their isolated rocky island, they lived and worked in the only building there, the now-unmanned mid 19th century Vibberodden
lighthouse.

Originally intended as two separate albums, the fact they were recorded on consecutive days, with the same band, it felt natural to present them as a double.
Thematically, apart from the titles - ‘Vieilles Caniques/Nouvelles Caniques’ (or ‘Old Kaniks/New Kaniks’ ) - there are some subtle differences between the two, a little more heartbreak and longing on the first, the second, lyrically a touch more content or resolved, something transitional in the life of SB maybe… though there’s plenty of songs about drinking on both too…!
It’s not unfeasible to imagine that the recording of ‘Old’, followed by an evening partying through the night in the lighthouse with André, transformed The Kaniks to the (bleary eyed/sore headed) ‘New’ the following morning!

Brinks is renowned for his unique anti-folk style: both playful and suggestive, insightful and entertaining. His mastery of storytelling, presented in both English and in French on these albums, brings us to the heart of the free-spirited world of Brinks’ life as a touring musician.
His fondness for calypso and the unusual provide the perfect foil to The Kaniks, whose folk instrumentation and country and bluegrass influences take this double album to a joyous place Brinks hasn’t been before in his extensive back catalogue.

“Pan European folk whimsy from Andre Herman Dune… these 26 songs sound like ancient folk shanties, but the wry lyrics (“I give all my money to Jim Beam and John Player/But I keep my good loving for you“) remind you these are thoroughly 21st century consturctions” Uncut [7/10]

“The master storyteller, the anti-folk, anti-king of European calypso has cut a wonderful disc of songs about drinking and songs about losing love and the late night malady in front of the dying embers of the night fire. This is a magical double album” NARC [4/5]

“Brinks’ playful mode of storytelling creates entrancing lyrics while the duo of a fiddle and banjo strips folk music back, resulting in an exciting album with a cohesive sense of identity” Cuckoo Review

“these are folk songs, sung in English and French, shot through lost love, found love and plenty of boozing” The Crack

“filled with the European calypso sounds he’s made his own with a generous helping of bluegrass throughout. It’s laid back, like long summer days down by the river, and filled with stories about booze, life on the road, love and heartache” Buzz [3/5]

“The songs are the typical Herman Dune fair in being easi-follow singalongs that even an idiot like me could holler along to. He basks in the sort of choruses that will have pubs of followers singing along and having a good time but oversteps the mark a bit on the otherwise enjoyable opener ‘Ten In the Morning’ where he begins to yodel. Otherwise this is enjoyably old timey campfire singalongs that I’m sure would sound rather good in an old style pub with a roaring fire and Stan and pals in the corner belting them out until way after closing time.” Norman Records

“It’s scary how infectious this tune is, despite minimal instrumentation, just offering string work to back up Brinks’ vocals. The old time sounds never seemed so refreshing.” Austin Town Hall

“a typically idiosyncratic offering; the lo-fi recording of the banjo takes you ear back to the early days of vaudevillian recordings, while the lyrics touch on the cab decorating choices of bus drivers, loves ability to overcome shyness and the dangers of not getting someone’s address; all in just over two minutes” For The Rabbits