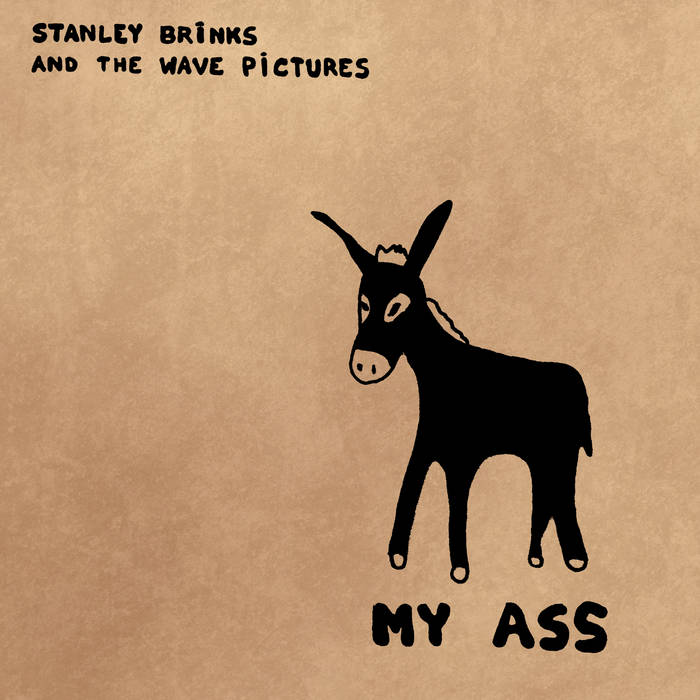 "...rich in a variety of sounds and original structures." Loud & Quiet

Stanley Brinks is joined by The Wave Pictures for their new record ‘My Ass’, the follow up to last year’s ‘Gin’, and their fourth album together.

After ‘Gin’ Brinks wasted no time in taking The Wave Pictures straight back to the studio, bright and early, the morning after the final show of their tour, to ensure they lost none of the fire still burning in their hearts from the final night’s drinks. Three playful days and twelve loose, jazzy, tracks later, with Brinks making salubrious use of his new penny-whistle and the assembled studio choir of friends hanging out, embraced into the recordings, he had his camel, ‘My Ass’.

‘My Ass’ is an album born out of Brinks’ life on the road, life as an outsider. It is a celebration of new drinking companions, in new bars, in new towns, every night. The memories of loved ones left at home, of places you can smoke inside and drink warm beer through the night. The shows that you wish could last forever. That island in the sun that keeps bringing you back.

"...an interesting and occasionally excellent collection." Drowned In Sound

Allison Murphy, Tasha Vorontsova, Freschard: backing vocals.
Tom Ashton, Simon and Giles also sing backing vocals here and there. Simon plays the conga drum and Freschard the woodblocks or shakers on a lot of the songs. Giles plays the piano on With My Chin. Freschard plays the banjo on Fire To My Mind.

Track Name: My Camel
join the party if you're feeling lonely
beat it slowly and whistle it lowly
i'll be trotting along, i'm not getting in the saddle
and there is no sweat on the back of my camel

no sweat on the back of my camel

no silver on the back of my camel

now if you lose me somewhere along the line
don't you worry 'cause i'll be doing fine
i know my way now, i'll be stayin' out of trouble
with nothing but love on the back of my camel

nothing but love on the back of my camel

the cops are coming
let's run away
Track Name: Brighton
at Hogan's in Darlington i was drinkin' a pint
inside, but underneath the skylight
when God himself turned the light on
and i knew i was going to Brighton

hey Stephanie, what's up?
'want some chips and ketchup?
let's take a walk , drink some beer
and watch the birds over the West Pier

don't let me spend the night alone
right above the funeral home
i need company at night
like i need the tobacco in my pipe
Track Name: Fire To My Mind
my, my, dear me
where will you be
when the sun goes down
and there's no-one around

i wish we were supernaturally connected
we'd meet all the time, even when we don't expect it
we'd see each other every day
and when you spin, i'd spin the other way

thinkers underestimate matter
they don't even know what they're after
your figure to me is more than divine
it sets fire to my mind
Track Name: Berlin
it was cold in the morning when i left Berlin
but last night's drinks had kept a fire burnin' in
my heart so i needed the chill and the dim
white light of the sun on my sallow skin

you said "so long" once more
then "ciao", and then "good day"
but peered back from behind the door
and almost started to say

knowin' i'd never see you anymore

i found my camel and my ass

my ass, my camel and i will go
where oats and beans and barley grow
there'll be nothing there for me to do
but drink and think about you

but drink and think about you
Track Name: Goodbye My Love
i've got a girl she's trim and slim
she moves her legs like butterfly wings
goodbye, my love, goodbye

one of these days and it won't be long
i'll call her name and she'll be gone
goodbye, my love, goodbye

there's an achin' in my heart
every time that we're apart
goodbye, my love, goodbye

my tears are falling down like rain
but oh i cannot stop the pain
goodbye, my love, goodbye

if i had wings like a turtle dove
i'd spy my girl from up above
goodbye, my love, goodbye

once i loved a girl so sweet
she would watch upon my sleep
goodbye, my love, goodbye

now her love has gone away
and i am cryin' everyday
goodbye, my love, goodbye
Track Name: Wakefield
it rained all day in Leeds
so i was at the pub all day, just hangin' out
but you fulfilled all my needs
in Wakefield that night

you fulfilled all my needs
in Wakefield that night

you make me feel so good
and Wakefield knows me now

our love like a shield against all evil
and Wakefield on our side
Track Name: With My Chin
i used to write whatever went on in my brain
one day i tried to read it all again
i had to throw all that rubbish in the bin
oh i've been leadin' with my chin

the days got shorter, it was getting me down
and i got tired of hangin' around
so i took a plane and left Berlin
oh, i've been leadin' with my chin

ten years and i'm still an outsider
sitting still, lurkin' like a spider
the dust has settled and the web is spun
i'm going back to my island in the sun

no more wrecks upon the shore
no wilderness left to explore
no bridges i would need to burn
i'm going back to my island in the sun
Track Name: Balluta Bay
there is nothing new in here
Magic Malta makes me wanna drink beer
they had the same songs on last year
Bah Bah Bah Balluta

i will end up in the sea
and you are even drunker than me
how many trees? one, two, three?
Bah Bah Bah Balluta

even if you tell me you love me
i'm not gonna move, i'm sorry
i'm sticking to the island of honey
Bah Bah Bah Balluta