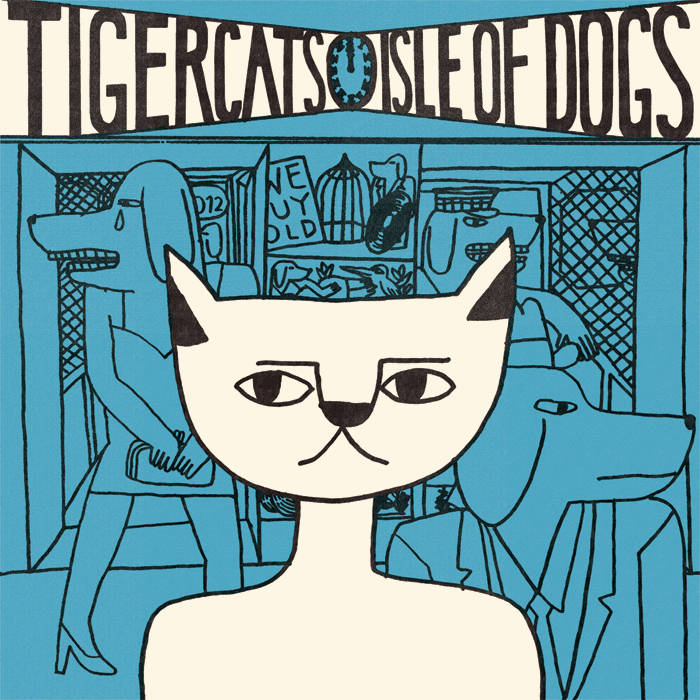 To combine shipping with other Fika Recordings item, order Isle Of Dogs from this page. The original listing is still available here: tigercatsfika.bandcamp.com/album/isle-of-dogs

The debut album from East London’s indiepop band Tigercats, Isle of Dogs, will be released on CD (Acuarela Discos) and 12" vinyl (Fika Recordings) on April 9, 2012. With 11 fantastically catchy, heartfelt and infectious songs, the band are well in to their stride, demonstrating an enthusiastic confidence and a fun-loving charisma.

Here’s a bit of history: Tigercats’ singer Duncan played in Esiotrot until suddenly he didn't, and after a respectful interval of ambling around for 18 months he asked his brother Giles to join on bass in a new band. The name Tigercats appeared out of the air and was soon followed by Jonny on drums, Stefan on guitar and Laura on keyboard.
Tigercats have released three singles on Haircut and WeePop! records that have been mostly compared to Orange Juice and Hefner, with the Wave Pictures and Violent Femmes close behind. Steve Lamacq said their longest ever song, "Banned at the Troxy" was "a great little single" and Huw Stephens said "it reminds me of Los Campesinos that, and that’s a very very very good thing". This is of course excellent, and perhaps someone will pick up on their love of Chic eventually.

Tigercats have been lucky enough to play some great shows with Allo Darlin, the Wave Pictures, the Lovely Eggs, Dum Dum Girls, the Pains of Being Pure at Heart and Omi Palone. After one show, Darren Hayman kindly said, "Incidentally, Tigercats are really good. Not [just] in that way that most people say bands are good, but good in a way that means something."

"Tigercats are a very very good band... a splendid guitar busyness inherited from Television, a rhythmic relentlessness taken from the Violent Femmes and, from Blondie, an understanding that just because you're a rock band, it doesn't mean you're not allowed to make people dance." The Sunday Times

"a band to listen to obsessively, and not just if you need to feel frisky." Drowned In Sound

“Their songs betray no alterior motives of forced cool, only an enthusiastic young band in love with making songs. Excellent, alive, and bright.” Artrocker

“Tigercats are that rarest of bands, an indie-pop act you can actually dance to.” Neon Filler

“…it reminds me of Los Campesinos that, and that’s a very very very good thing.” Huw Stephens BBC Radio 1

"Tigercats have fed well off London lore, gorging apparently on a diet of Spearmint and Television Personalities, the anti-societal punk poetry of Shirley Lee and Dan Treacy. Hefner too." For Folks Sake

"if you want a bunch of gorgeous, well-thought-out tracks for any occasion, this is the one for you. Superbly crafted, original and soul-tingly, Tigercats can bring who they want to the party." Click Music

“What Tigercats has come up with is a manifesto for what it means to be alive, to be in London and to be living life… if I was 16 right now I’d think this album was sent to save my life.” A Layer of Chips

“TIGERCATS write songs about Stevie Nicks and Whitechapel, all delivered atop a cloud of shimmering dream rock. Drums twist and guitars bloom like fireworks, whilst a plaintive vocal sounding eerily like Pete Shelley underpins their sound.” Upset the Rhythm

Recorded at Soup Studios soupstudio.co.uk, London by Simon Trought and Giles Barrett, except Limehouse Nights by Ian Button at his Magical Mobile Studio. Mixed by Giles Barrett & Tigercats.
All songs writen and performed by Tigercats.