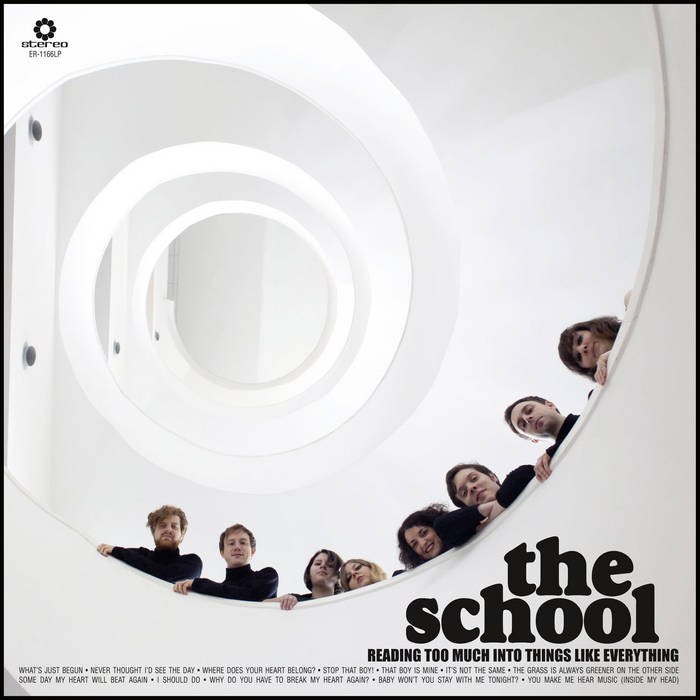 It seemed like it would be impossible to improve on “Loveless Unbeliever”, but they did it. The album went halfway around the world, showed up on hundreds of “best of” lists of the year, was mentioned by and included in some of the most prestigious press about music and culture in general. Up to four singles came out of their compositions. They toured all around the planet and were a hit wherever they went. And now their new album is here and they have left us totally speechless. “Reading Too Much Into Things Like Everything” is a better version of THE SCHOOL. The arrangements are, if it’s even possible, even more delicate, more elegant; the emotions make your hair stand smoothly on end and the vitality and freshness are just as strong as they were on their first single.

Because Liz and her crew are capable of writing songs like “Where Does Your Heart Belong”, which would stand out on its own strength on a compilation of the best songs by THE RONETTES or THE SUPREMES. The album opens with a song like “What’s Just Begun”, which Brian Wilson and Burt Bacharach would unanimously applaud. Stuart Murdoch is thinking that he has to go back to doing songs “It’s Not The Same” and “Never Thought I’d See The Day”. The RAMONES can’t stop dancing to the rhythm of “Why Do You Have To Break My Heart Again”. Jack Nietzche and ABBA are hugging while they remember the first time they fell in love, as they listen to “Baby Won’t You Stay With Me Tonight”. And all of this without forgetting for one second that we’re listening to Liz and her crew. Because that’s how the new THE SCHOOL album is: well-assimilated classics that are loaded into a collection of impeccable songs; we almost dare to say inimitable.

But the most important thing about this album is that it manages to reach an almost inexplicable level of magical – a quality that only the great albums have – which transcends the utterly perfect songs and is led by the whim of emotions. This magic could be broken by just a slight alteration in the order of the songs, or some small out-of-place arrangement. Which is why we can do nothing but praise the work of Dave Wrench (BRITISH SEA POWER, Euros Childs, BAT FOR LASHES, Beth Orton, James Yorkston, FANFARLO, CARIBOU, EVERYTHING EVERYTHING, HERMAN DÜNE). But everything is there, moving us from song to song, from the dreaminess that sets off the previously mentioned “What’s Just Begun”, to the energy and vitality that the entire album gives off every second. There are little snips of bitterness like “It’s Not The Same”, there’s that melancholic goodbye that melts into the fade-out of “Baby Won’t You Stay With Me Tonight”. And we can’t forget that happy ending, “You Make Me Hear Music”, which is even dreamier than the album starts of as, full of hope and beauty, that only someone in love can make: You make the music in my head play.

We know it’s hard to explain, which is why the only thing we can do is encourage you to listen to this marvellous album, and hope that you feel the same way we do. Thanks, Liz. Thanks, THE SCHOOL.