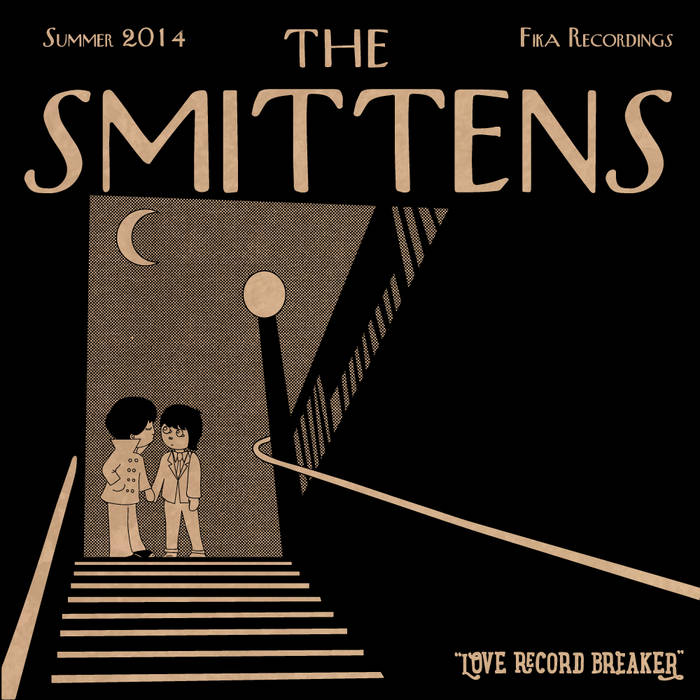 “They craft bittersweet indie pop” Neon Filler
“twee pop in the best possible way – jolly, carefree and full of character” Shout4Music
“each and every song they write is a rampant musical pleasure – they could force a smile on the sourest face” Bearded Magazine

Love Record Breaker is a transitionary record for Burlington, Vermont’s The Smittens.
They’ve grown to a 6 piece with the incorporation of New York soap maker Missy Bly, who having made a guest appearance on their previous LP, Believe Me, contributes the title track here and appears throughout the 8 tracks on vocals, providing a melodically fuller sound. It’s also the last record from The Smittens to feature Dana Kaplan’s vocals pre-transition and pre-testosterone, prior to his new voice and new vocal arrangements.

This is the most forward album from The Smittens so far: sluts, whores, dead pets, not wanting to live and a rather explicit discussion of indie politics all feature as part of this record. It includes a cover of US folk duo Indigo Girls’ Closer To Fine, a homage to their queer forebears as well as their geeky pasts; The Smittens describe the original as an “80s lesbian campfire anthem”.

The title track, Love Record Breaker, was written as a response to a friend’s cold hearted Conquistadorian conquests around town, from the perspective of someone who had been through his conveyor belt of gal pals. “I wanted to convey the anger and frustration that happens in that situation, but keeping a sense of dignity despite feeling like a slut in a long line of ‘sluts’ in waiting”.

This is also a record that has taken The Smittens back to their roots, completing the circle. Writing the track These Lips returned them to their collaborative and improvisational past, not as simple as it used to be with members now living in Philadelphia and New York. Growing from a jam about a lip infection preventing Dana from kissing his partner, The Smittens twisted and turned the meaning into something far saucier, implicating both the narrator and the listener.

Closing the album is a remix of These Days from Death Team’s Johen Rafael Tilli, a Swedish producer The Smittens met on a cruise ship in the Baltic Sea: “I wanted to create a sound that could combine Scandinavian queerness with Moog syntheziers, but at the same time breathe a sense of expectation”.

The album was recorded by The Smittens at Twee Valley Manor and mixed by Gary Olson (The Ladybug Transistor) at his Marlborough Farms Studio in Brooklyn, NY.