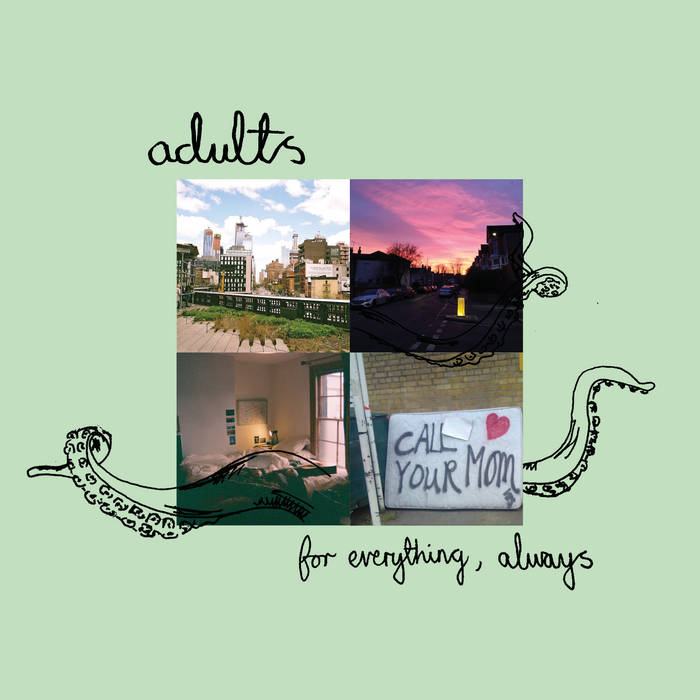 Combining elements of indie-pop, punk, emo and just a little bit of 2009 vintage math-rock for good measure, adults are four pals trying to find their way in a disintegrating world. for everything, always reflects on how we look after ourselves, one another and people in our community; it’s a riotous collision reminiscent of Johnny Foreigner, The Beths or Trust Fund, bursting with crunching guitars, speedy drums and yelping dual vocals.

The first single all we’ve got // all we need is a song about individual torments: “having a breakdown on the Megabus to Bristol", and about collective support: “mutual aid, building strong networks of community resistance to the hostile environment, to food insecurity, to the homophobia and transphobia by the state and about trying to look after one another”.

the secret song to end side one deals with loss, guilt, rejection and anxiety, exploring the travails of a messy breakup and the masculine urge to bury everything deep down despite the fact that that only hurts people more.

tfl has a lot to answer for is a “reflection of drinking way too much in yr mid 20s, staying up too late, burning yrself out and how it impacts on yr relationships and mental health”.

Recorded and produced by Rich Mandell (Happy Accidents, ME REX) over a couple of weekends in the summer of 2021, for everything, always is the constantly naive, but optimistic, outlook: always striving for a better future in the face of modern society’s bullshit.

adults are a noisy pop band desperately clinging on to the ghosts of 2009.
Their songs are a silly, joyful, and occasionally sad, look back at the tail end of their 20s, a way to grapple with breakups, parties, alcohol and loneliness, and looking hopefully into the future.
They’ve released singles with Art Is Hard and For The Sakes Of Tapes, and self released an EP (The Weekend Was Always Almost Over), which was subsequently released on vinyl by Caballito records. adults are based in south London.

Faster, messier and sillier than they have any right to be, adults are hopeful and joyous, fighting through the existential angst of youth to try and find their place in a world on the brink, as grown ups, as adults. Like the octopus on the artwork says: “we're all we've got, we're all we need”.

the sad and sorry state of a band in the last throes of their twenties.

no one told us at fourteen that playing music would be like this. the late night load ins, scheduling annual leave to squeeze out fourteen songs spread out over fourteen days.

the news had only just reached us. dancing and laughing with the ppl we love remains everything even when we knew it was time to pick up our shoes and leave. i can still see yr smile coming and feel mine forming. and the weekend was always almost over.
and its funny. and its all so reductive. and none of this counts until the boredom is tangible.
either way
find comfort in that
there is always a better way to do this
the list will complete you first

p.s. i had a little snooze and now i will probably never arrive at yr house.

“a cacophony of clattering drums and belt-it-out choruses Los Campesinos! or Martha would be proud of evidence that adults seem to have stumbled into something rather marvellous”
For The Rabbits

“There’s an ample buoyancy from the vocal work, and the guitars are crunchy, though I like how they’re a bit tempered here; think of Martha having to play at your local library…hooks, but just a little more subdued. There’s just something about this that radiates joy” Austin Town Hall