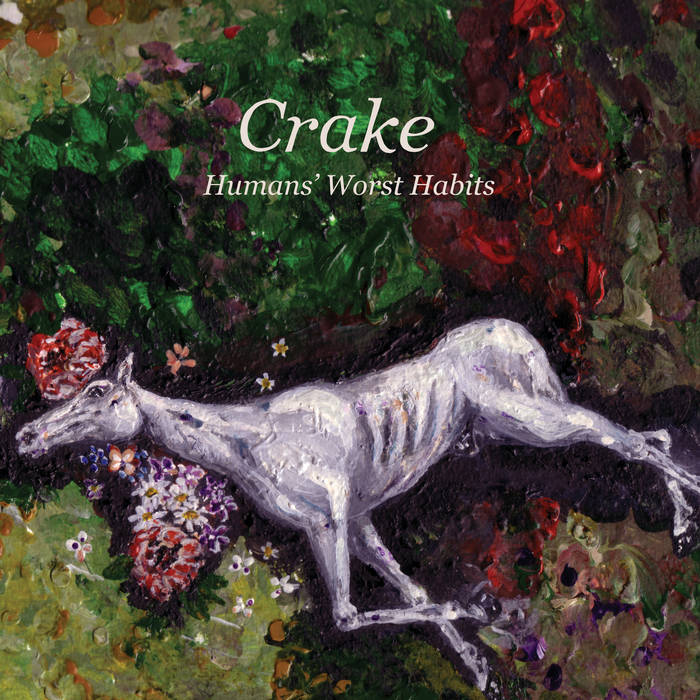 Art Fin I especially like the wonderfully creaky vocals which are in a high register that reminds me of Teleman, Goodbooks and Stornoway in this alt-folk infused indiepop. Favorite track: Bobbie.

Led by enigmatic songwriter Rowan Sandle, Crake is driven by her endless curiosity. Armed with her gently cracking vocal, and inspiration from writers like Shirley Jackson and Nan Shepherd, she sings of crinoids, slime mould and pussy willow. When they supported Buck Meek at Brudenell Social Club, Buck found himself so beguiled by Sandle and her band that he invited them to support Big Thief on their UK and EU tour in 2019. Crake duly obliged and have been building towards their debut full-length ever since.

Much of the forthcoming album revolves around the death of Sandle’s friend Anna, who died in Syria after being hit by a Turkish air strike. Anna was working for a woman’s liberation group in the war-stricken country when the tragedy took place. ‘Human's Worst Habits’ explores the grief that followed and the lessons learnt from dealing with such a significant loss.

Sandle does, however, find space to explore more themes alongside this grief, such as cruelty and queer nature. On lead single ‘Winter’s Song’ she acknowledges the cruelty and coldness that exists within us all, and questions how we can continue to grow and love whilst remaining true to that.

Speaking about the track, she said: “Winter’s Song is about the absolute mundane beauty of being fallible. It's a true story, I saw the moon rise but swore it was the sun setting. I think about this line a lot: “keep a little coldness in you, just wear it soft and gentle” Be soft, be kind, be honest. Being unremarkable has its own beauty.”

Sandle’s love for queer nature is so fervent that it makes the experience of listening to Crake akin to that of stumbling on an entirely new world. Sandle believes that life isn’t as black and white as we’ve been taught, and thinks nature holds the key to revealing the true nature of human experience. The appearances of things like slime mould - single-celled organisms that form a single body when in search of food - brittle starfish - a type of starfish whose awareness isn’t concentrated in one place - and other such oddities furnish ‘Human's Worst Habits’ with a folklore all of its own.

‘Human’s Worst Habits’ will send you down multiple rabbit holes and you’ll emerge from each with a newfound appreciation for the complexities of the world. Perhaps even more important than this though is the humanity that lies at the very heart of this debut full-length. Whether it’s in the sensitivity in how she portrays the loss of her friend, the depiction of our most base instincts - namely cruelty, passion and love - or the sincere, pure quality of the songwriting itself, it’s this that makes ‘Human's Worst Habits’ essential, and invaluable listening.

“A pensive, dejected moment of magic, but magic nonetheless”, Gold Flake Paint
"Charming and intimate alt-folk”, Dork
“Consider it a maxim: when Crake releases music, listeners will be entranced by it”, Secret Meeting
“"In a world of cynics, [Crake] make you believe anything might still be possible”, For The Rabbits
“A perfectly-timed warm blanket to block out the cold world and insulate the love”, Beats Per Minute