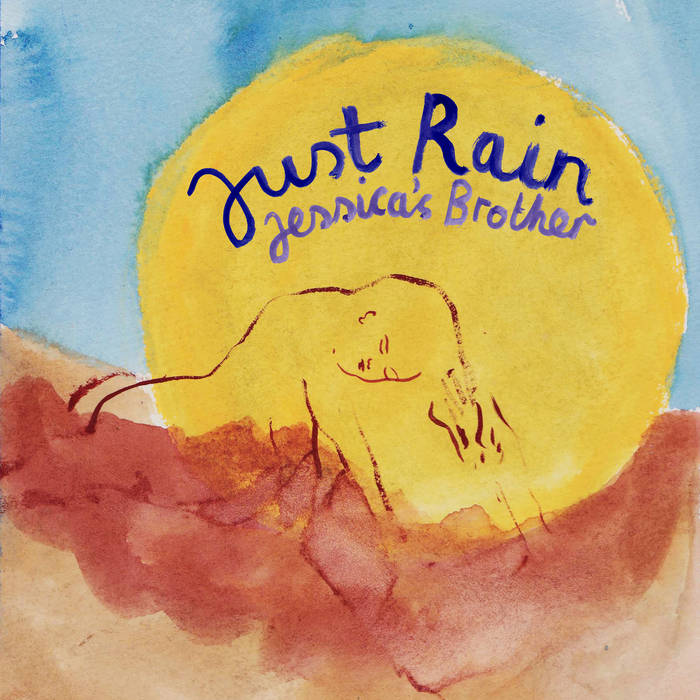 Stitching together a variety of influences, from crunching indie-rock, to gothic country and contemplative psych folk, Jessica’s Brother create the sound of a band coming together and getting caught up in the rush of starting afresh.

The disintegration of a long-term relationship, coinciding with a global fracturing, provided a catalyst for ‘Just Rain’. The songs explore a relentless collision of melancholy and resilience alongside themes of comedy, agency, and hope

The title track lays this out with an opening burst of slacker rock as Tom reflects back over a passage of time that feels like persistent unrelenting rain. Vacillating between despair and defiance, we uncover the strength to shrug it off as “just rain”; after all, as the track draws to its conclusion “losing sight can be relieving”.
Interestingly, the lyric, “open up your heart, it can help to wear a mask”, was written before the pandemic had properly struck in the UK.

‘Finding Snowdrop’ is a spiritual rebirth gone wrong, influenced by the rambling poetry and hooks found in Yoni Wolf’s Why? and Bill Callahan. In spite of failure, the potential for growth remains. This budding, on an ageing tree, is celebrated in the joyous rhythms, off-kilter harmonies and a fizzing guitar solo.

On 'Full Swing’ both the baritone of Tom’s delivery and lyrics conjure the darkness of the everyday: ”cut my own brakes, living in hiding of late” are reminiscent of The Handsome Family’s wonderful way of transposing the tradition of murder ballads and the bleakest tales to the modern.

A more expansive and luxuriant sound runs through ‘Just Rain’, than the sparser Silver Jews / Jason Molina atmosphere of their 2018 debut, from the gutsy alt-rock of the title track to the off kilter pop of ‘Little One', reminiscent of Sparklehorse, a tale of young love and youthful exuberance.

Jessica’s Brother formed in October 2016. Jonny and Charlie worked together in a framing business and had often talked about collaborating in a band together. Fate intervened when Jonny’s girlfriend Jessica introduced him to her brother Tom, and they found a songwriter in waiting. Their debut, eponymous, album released in 2018 was warmly received.

‘Just Rain’ was produced and engineered by Shuta Shinoda (Hot Chip, Ghost Poet, Anna Meredith) at Hackney Road Studios during the summer of 2020. The album features Dan Mayfield’s elegant touch on violin (he has performed with artists from Daniel Johnston to Allo Darlin’), and new female voices from Polimana (a jazz vocalist from the SoCal suburbia) and Shantha Roberts (whose voice has graced Glasgow’s reggae sound system Argonaut Sounds).
The eponymous Jessica Jane Charleston, a painter and printmaker, provides the meteorological juxtaposition to the album in the visuals, the warmth of a giant sun looming over the contorted figure, rising up to fight another day. Tom was drawn to the hotter colours this time round as opposed to the moodier blue palette of the debut. The colours and figures convey a sense of revival after a period of hibernation. It fits well alongside the band’s hiatus throughout the pandemic and their much awaited return.

With an at times folkloric narrative, ‘Just Rain’ is both poetic and playful retaining throughout a thread of darkness.

The record takes a step forward in terms of production while maintaining the band’s rough around the edges charm. It is an intimate affair punctuated with louder and more unwieldy moments. A true story revolving around a relationship and a world falling apart.

“A band to fall in love with... there is no derivative pastiche or homage here. It all feels right, and, as with the best bands, they make it sound new” Saatchi Magazine

“A stunning combination of gothic-country and 1960’s inspired psych-folk, simultaneously downbeat and expansive” For The Rabbits