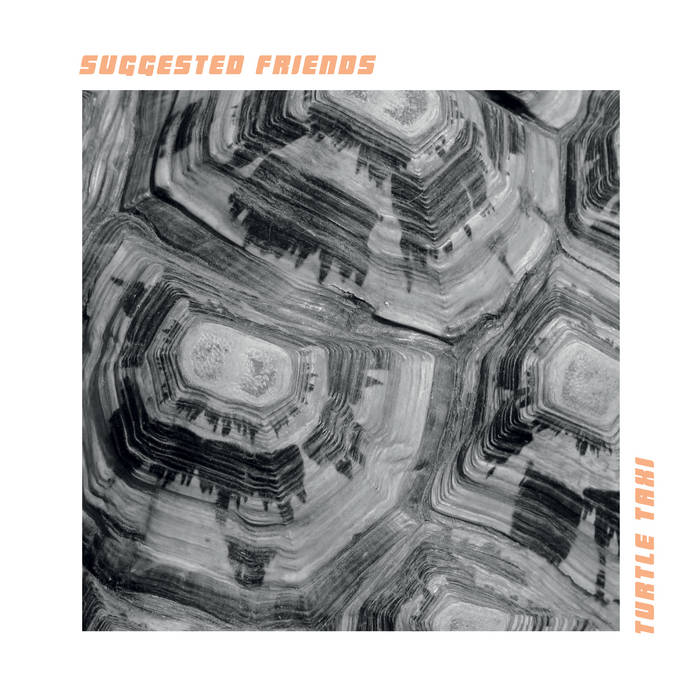 NB: North American fans: save yourself some shipping costs - you can order the vinyl direct from our friends at Happy Happy Birthday To Me Records if you'd prefer a US pressing! hhbtm.com/product/suggested-friends-turtle-taxi/

Suggested Friends are an indie rock quartet with a firm grounding in queer identity, fusing DIY punk roots with the interweaving guitars of 90s indie and a sometimes tongue-in-cheek take on the performative masculinity of 80s rock. There’s a tenderness to their songwriting, with lyrics reflecting on cultural malaise, trauma recovery and the banal absurdity of everyday life. Personal politics can come with an incisively dry sense of humour too.

Turtle Taxi is their second album and demonstrates just how far they’ve come from the raw, scuzzy sounds of their DIY debut; unrepentant in letting the pop hooks loose. The choruses are big, harmonies frequent, and guitar solos abound - this is a lush, textured leap forward.
Suggested Friends are more confident, acknowledging emotional pain and exploring how this affective space elides with a more expansive sense of injustice in the world.

On Pretty Soon Your Grave Will Be A Landfill the earnestness and absurdity of gaslighting politicians is laid bare, through to the futility of naming social ills and not acting on them on At Ease. The album’s title track, Turtle Taxi, talks about the relationship between love as a labour and the focusing in on life as an opportunity for that to flourish in all directions – (‘teach ‘til I die, let this all pass by…’).

The quieter numbers on the record, such as At Ease or Blooms, recall folkier inspiration such as The Weather Station and Hiss Golden Messenger, through to the alt-pop oddness of Nilufer Yanya and Blood Orange. But for parallels as a socially conscious, high-energy and vulnerable punk pop band, think Martha or Charly Bliss - though they’d argue for that perfect sweet spot between Weezer and Abba!

Recorded in rural Norfolk over two separate sessions a year apart, album was able to flourish into a more collaborative effort, incorporating Faith’s wife Meghan on percussion and Sickroom Studio's Owen on trumpet - plus plenty of time to experiment with overdubs and piano flourishes to up that classic-rock vibe that simmers just under the surface.

Suggested Friends formed in late 2015 following a chance meeting at a gig between Christabel (drums) and Faith (guitar and vocals). They were soon joined by Jack on guitar, who had met Faith through an activist group in London. Mammoth Penguins’ Emma Kupa is the most recent addition on bass, having worked with Faith on a number of projects over the past four years.

“a bright, fun, sparkly album with raw and to the point lyrics – there’s no hiding from the wit. Check it out; you’ll be hooked” Loud Women

All songs written by Suggested Friends.