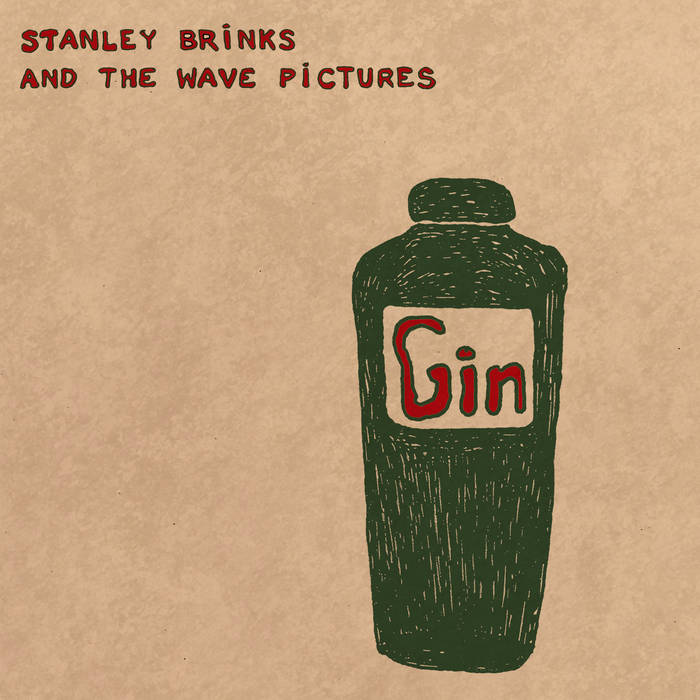 Vassilis Gonis This is one of the strongest albums by Stanley Brinks and this alone speaks volumes about its quality and merits, since Mr. Brinks's material is always great. The Wave Pictures are doing a terrific job as his backing band and the results are simply breathtaking. This has so many merits that a simple review can not cover. His voice sax and guitar sound is distinctive, yet I find that fans of Hefner, Jonathan Richman, Velvet Underground, Violent Femmes will certainly enjoy this immensely. Favorite track: I Wanted You.

Stanley Brinks is joined by The Wave Pictures for their third album together; their first since 2010’s ‘Another One Just Like That’.

Recorded entirely live in the studio, without headphones or overdubs, and with a good deal of improvisation, ‘Gin’ is a modern-sounding, in a way avant-garde, old school recording of text-driven songs. The Wave Pictures didn't get a chance to learn the songs before the session, Stan having forgotten to put a stamp on the demo tape he'd sent them from Berlin.

To anyone familiar with Stanley Brinks' huge discography - more than 100 albums - ‘Gin’ might sound considerably more raw and less sophisticated than some of his previous recordings. However this body of work remains rich in jazzy sounds and original structures, the songs looser and full of playfulness, the lyrics encapsulating their essence.

It goes without saying that Gin - the drink - was the inspiration for the album; while writing, and while recording.

‘Gin’ was recorded at Soup Studio, London, by Simon Trought and Giles Barrett, one sunny day in May 2013. A few months before, when Stan was at the studio playing guitar and sax on The Wave Pictures' ‘City Forgiveness’, they recorded one of his songs - ‘Maybe I Will See You Again’, now the B-side of the ‘Orange Juice’ 45 - just for fun. Giles Barrett, who was engineering, suggested a whole album, and he made it happen.

The Wave Pictures are David Tattersall, Franic Rozycki and Jonny “Huddersfield” Helm. Formed in 1998 when Franic and David lived in a village called Wymeswold, the band played with several drummers until Jonny became a permanent member in 2003 replacing Hugh J Noble. In the beginning the band learned to play together by covering Jonathan Richman songs but soon David was writing lots of original material.
They have since released five studio albums to critical acclaim and played numerous sessions on BBC 6 Music, Radio 1 and Xfm. The interest generated by these recordings has enabled The Wave Pictures to play shows all over the world with artists including Jeffrey Lewis, Darren Hayman, Stanley Brinks, Freschard and Herman Dune.

From the dusky romantic feel of opener ‘One Minute Of Darkness’ to the love song, encompassing nautical metaphors, which is the last track ‘Not To Kiss You’, the album takes in the night, love & passion, Krishna, the modern way of life, exploration and moving on; all echoed brilliantly in the rich and varied musical interweave - by turns a jam, a calypso, some indie rock, a groovy mantra, a little voodoo rhythm and some good old regular country.

All topped off with the Stanley Brinks endearing signature command of naïvely rhymed,
overenunciated English. He touches the language in a way which really, no native speaker could get away with.
‘Gin’ is quite simply a beautiful, though-provoking, uncomplicated album.

“The Wave Pictures’ classy post-punkish bite is a great foil to Brinks’ whimsy on these unhinged, loose-limbed story songs. Sometimes gin makes you win as much as sin.”
NME [6/10]

“typically rich in a variety of sounds and structures; the songs are looser, more playful and all the more endearing because of it”
Loud and Quiet

“Gin rises above the swiftness of its creation, thanks to these few detours that Brinks and The Wave Pictures take around their usual territory. The fact that the catchiest track from this session – the single ‘Orange Juice’ – is not included just underlines that these guys seem to seamlessly slot together when they hit the studio”
Drowned In Sound

“there are lead guitar breaks which are loud and clean, like a messy second-grunge-era approximation of the great early electric guitarists from the ’50s like Les Paul and Jimmy Bryant, real nimble but a bit anarchic too”
Norman Records [8/10]

“There is a wonderful naïve feel to the album, more impressionistic than precise. It has an intensity like Gauguin, bright and colourful but still with that all is not right in paradise feel.”
Fatea Magazine

Recorded and mixed by Simon Trought and Giles Barrett at Soup Studios, 1-3 May 2013.
soupstudio.co.uk

On Spinola Bay the verses are spoken by (in order of appeance) Dave, Giles, Franic and Jonny. Stan plays lead guitar. Giles plays a shaker, Simon a conga drum and Freschard wood blocks. Everybody sings.